Setting up wireless networking on the Raspberry Pi is actually much easier now than it used to be. Around March of 2016, the NOOBS team updated the raspberrypi-net-mods package to read a file off of the SD card and automagically update network settings. This makes setup way easier than plugging in a keyboard, fetching a monitor, and making the change after the OS is installed.

I'll be using MacOS for these examples, but these steps will be similar for Windows Explorer or whatever your file manager of choice is. For the Raspberry Pi OS, in order to get this simple setup working you must have installed NOOBS. Directly flashing an SD card with Raspian or another OS won't work - we need to use the scripts & facilities that ships with NOOBS.

Once NOOBS is installed, insert the SD card into your main Windows/Linux/MacOS computer. You should see two partitions or disk mounts appear - one of them will be labelled "BOOT": 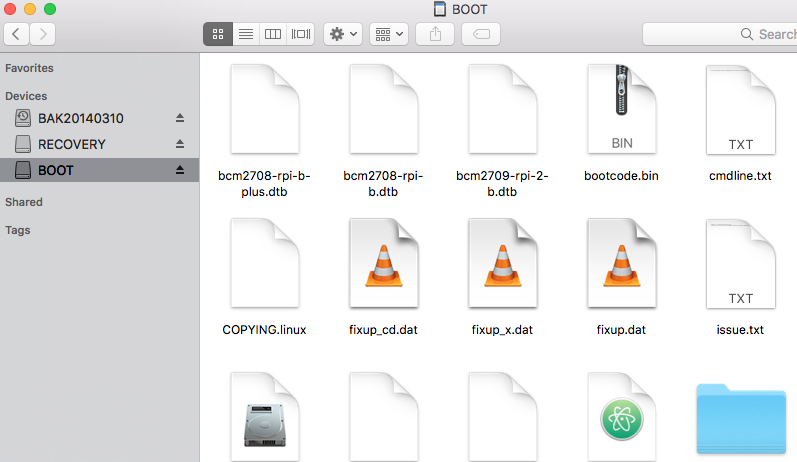 Finally, create an empty file in the same mount point simply named "ssh" - nothing needs to be inside the file. When the Raspberry Pi starts up, it should see this file and automatically enable SSH connections.

Once you have generated your configuration and saved the file to your SD card, eject both partitions from your computer and insert the SD card back into the Raspberry Pi.

Now you can install the Hack Clock software - just follow the instructions listed at https://github.com/deckerego/hack-clock/blob/master/README.md.

Now that your hardware is set up, and once you have installed the Hack Clock software, you can continue to the programming lessons and make your Hack Clock respond to buttons, light up an LED, or play an entire wake-up playlist!

The text of these original instructions, lessons and how-to guides are licensed under a Creative Commons Attribution-NonCommercial-ShareAlike 4.0 International License.

Original source and licensing for images are listed within /images/LICENSE.